His withers/shoulders are over 6 feet tall, and when he holds his head up high, he’s over 7 feet tall!

Check out his story below …

Some Pictures of Guardian - (Our Percheron)

We will be adding more as we get more photos, and if you take one you want us to add, we can try to get it up.

The Day after he arrived, note his size vrs all the other horses …

NOTE – He has filled out over time since this video.

Getting to know Guardian....

He was funny … When he first came, he did NOT want to come into the barn, nor did he want to be in a stall, so we would feed him in a stall where he could walk into and out of, so he could get over his fear of being inside a stall.

(Who knows if he had been locked in a stall and ignored for log periods of time…. we don’t know, but something made him NOT like being indoors.)

He would watch Heidi as she would be busy about her work, and then look away whenever she would look at him.  Heidi never caught him watching her until after someone pointed it out to her.

His ages is unknown.
The vet refused to date his age, because of how his teeth are smashed in.

The first few times Heidi would ride him, he was too thin for a saddle to fit him, and when she would walk beside him, he would be so scared he would walk on top of her.  Just as a new born foal walks so close its mother.  Guardian would be on Heidi’s right side and step on her left boot.

He now weights around 1700 pounds, but still has more weight to gain, as he should be over 2,000 pounds.

He used to be used as a driving horse out on the farm (from what we were told).  He was worked until he fell flat on his face, and smashed in all his teeth.

As a result of needing to let his teeth recover and to heal, he had gotten down to 1,249 pounds.

We got him because someone had acquired him and was not sure if they could afford to pay to feed him.  They thought they had a buyer for him, but it did not work and then we got him. 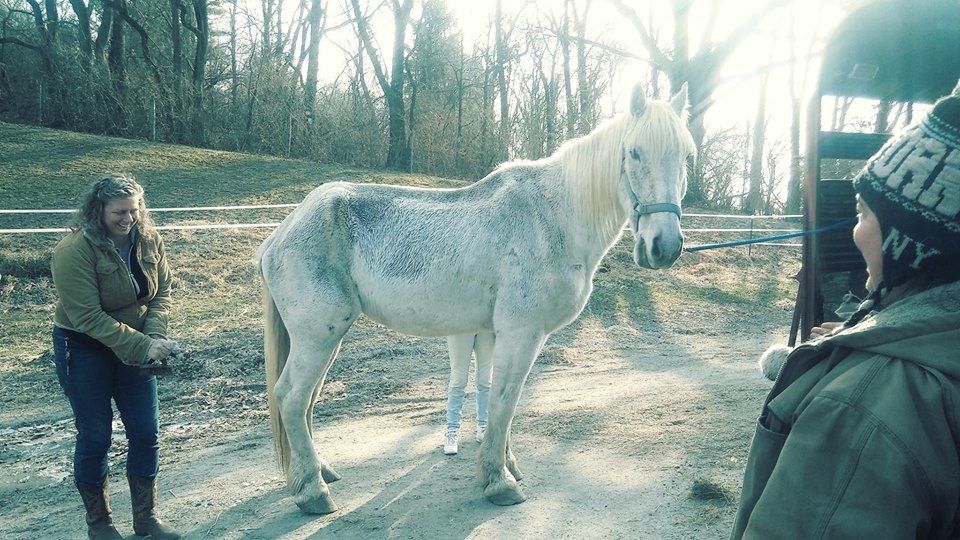